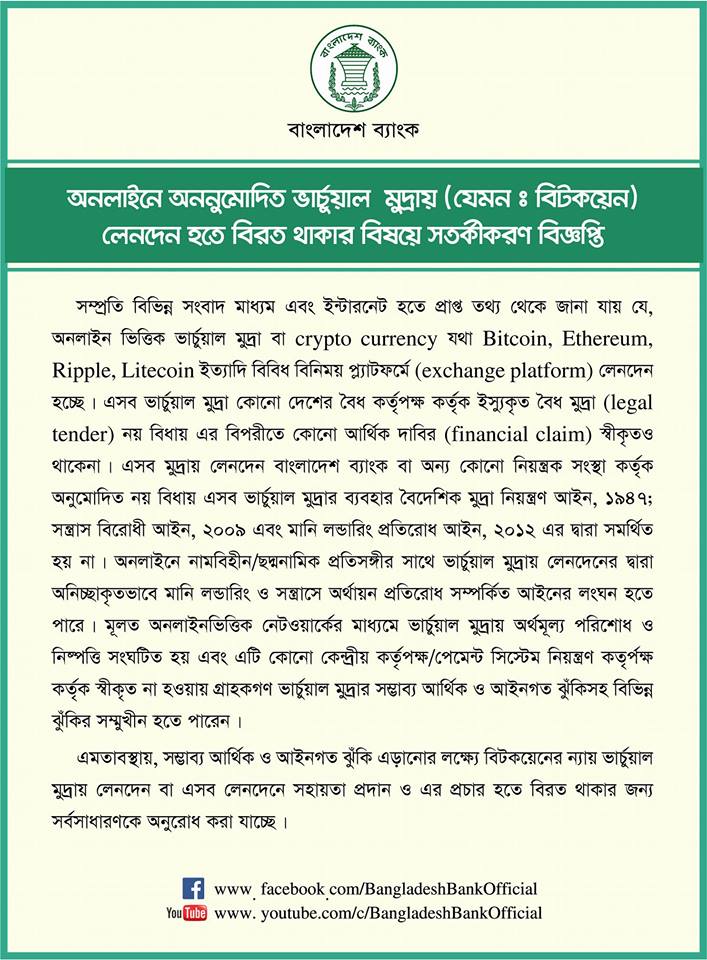 Bangladesh Bank has banned the use of Bitcoin, a virtual cryptocurrency, in Bangladesh by issuing a circular on its website. The circular read that Bitcoin is not an authorised and legal currency in any other country in the world. “Transaction with this currency may cause a violation of the existing money laundering and terrorist financing regulations,” the circular further read. However, the notice does not carry any indication on how the regulation would be enforced. The circular also said Bitcoin is not authorised by any regulatory authority and thereby its use may cause financial loss of the citizens. “According to the information received from the internet and different news media, transactions have been taking place using different online-based exchange platforms including Bitcoin, Ethereum, Ripple and Litecoin.” These virtual currencies are not authorised by any legal authority of any country and thereby no financial claims can be made against such currencies. Besides, these currencies do not conform to Foreign Exchange Regulation Act, 1947, Anti Terrorism Act 2009 and Money Laundering Prevention Act, 2012, the notice also read. So, the transaction of virtual currencies online with any unnamed or pseudo named peer may cause a violation of the above-mentioned acts and lead clients to face various financial and legal risks. Under the circumstances, the citizens have been asked to refrain from performing, assisting and advertising all kind of transactions through the virtual currencies like Bitcoin to avoid financial and legal damages. Meanwhile, a Facebook page titled “Bitcoin Exchange: Bitcoin Buy and Sell Bangladesh” has been opened in recent times. A local website named bitcoin.com claims that Bitcoin transaction can be performed in Bangladesh through Bkash, Rocket and other general banking accounts.   Bitcoin is gradually gaining popularity across the world. As a result, central banks of many countries have taken measures to adopt separate policies for Bitcoin. Bangladesh Bank Deputy Governor SK Sur Chowdhury, in a recent seminar, said: “A committee will be formed by next June, by coordinating with various public and private agencies. The committee will work to find out a way on how to introduce Bitcoin in Bangladesh. Bitcoins can be used for online purchase like other normal currencies. But governments and central banks work through the general currency system. A person or a group of software developers named Satoshi Nakamoto launched the cryptocurrency in 2009. The Bitcoin transaction can be performed directly (peer-to-peer) between two users. A method named “cryptography” is used to ensure the security of the transactions. Such transaction can be performed without revealing the identity of the user. The primary reason behind its popularity lies in the concept that investing in Bitcoin would generate a huge profit.

Legality of Cryptocurrency in Bangladesh

Bitcoin is a cryptocurrency invented in 2009 by a software developer allegedly named Satoshi Nakamoto with a goal to create “a new electronic cash system” that was “completely decentralised with no server or central authority.” The idea, apparently, was to produce a means of exchange, independent of any central authority that could be transferred electronically in a secure, verifiable and immutable way.

Bangladesh is one of only 6 countries in the world that are considered “hostile” to bitcoin. Bangladesh Bank issued its first “warning” against the use of Bitcoin in 2014. The warning included caution towards transacting in any artificial currency as this could involve unauthorised actions stated in Foreign Exchange Regulation Act, 1947 and the Money Laundering Prevention Act, 2012. The central bank expressly disapproved any transaction of cryptocurrencies by stating that these virtual currencies were not legal tender issued by any country and it does not depend on and is not approved by a central payment system, as such, people may be financially harmed by it.

The recent global popularity of bitcoin and other cryptocurrencies pushed Bangladesh Bank to issue another “Cautionary Notice” on its website on December 24, 2017. While the recent notice reiterates the laws mentioned in the first notice, it added the Anti-Terrorism Act, 2009 as another law that use of bitcoin could violate. Moreover, citizens were asked to refrain from performing, assisting and advertising all kinds of transactions through the virtual currencies such as Bitcoin, Ethereum, Ripple and Litecoin to avoid financial and legal risks.

The 2014 warning by Bangladesh Bank did not get much coverage in the local press but international press and bitcoin forums widely reported that Bangladesh has “banned” bitcoin and warned that bitcoin users may be jailed for up to 12 years.

However, from the two cautionary notices published by the central bank, it is evident that the regulator has fallen short of “banning” or “criminalising” the use of bitcoin except in cases where it is used to commit an existing offence under the Foreign Exchange Regulation Act, the Anti-Money Laundering Act and the Anti-Terrorism Act. It could be argued that the use of regular currency to commit crimes under the same Acts would be similarly punishable, and as such while bitcoin itself is not illegal, its use to commit crime is.

Bangladesh Bank's declaration that it is not legal tender finds resonance with the regulatory response in most countries. However, it could be argued that bitcoin not being accepted or recognised as legal tender does not necessarily make it illegal. The legal basis of a “warning” published by the Bangladesh Bank is also questionable.

The Foreign Exchange Regulation Act and Money Laundering Prevention Act contain provisions for punishment and criminal liability, for trading, importing, and exporting currencies without authorisation of the Bangladesh or if not performed through an authorised dealer, and for illegally laundering proceeds of crime or foreign currency. The definition of currency is given in section 2(b) of the Foreign Exchange Regulation Act, which includes:

(ii) such other similar physical or non-physical instruments, or both as may be notified by the Bangladesh Bank from time to time;”

Despite its name, bitcoin is not a coin, and also does not match any of the items listed in section 2(b)(i). As for section 2(b)(ii), there is a positive obligation upon Bangladesh Bank to make a statutory notification and declare that cryptocurrency or bitcoin is “currency” for it to be classified as such, but it has not done that till date. Thus, it appears that bitcoin or other virtual cryptocurrencies may not fall within the purview of the definition of “currency” under section 2(b) of the Foreign Exchange Regulation Act. That being the case, criminal offences relating to trading foreign currency without authorisation, arguably do not explicitly catch bitcoin or cryptocurrencies.

According to section 2(s) of the Money Laundering Prevention Act, foreign currency means any foreign exchange defined under section 2(d) of the Foreign Exchange Regulation Act. However, similarly, the definition of foreign currency in Money Laundering Prevention Act is referred to foreign “currency”, which, as discussed earlier, apparently does not cover bitcoin and cryptocurrencies.

It is not clear, upon what basis, the “warnings” regarding legality of bitcoin have been issued so far. The warnings also refer to the Anti-Terrorism Act which criminalises funding of terrorism, but the Act does not make any reference to bitcoin, cryptocurrency or any other currency whatsoever.

Despite Bangladesh Bank's warnings discussed above, the Acts of Parliament which they apparently are based upon, fall short of criminalising or even banning bitcoin or crytocurrency. However, the fact remains that Bangladeshi authorities are adamant to stop the use of bitcoin and are reportedly hunting bitcoin traders and miners.

In the wake of the global trend in the use of cryptocurrency, it is high time that Bangladesh comes up with a properly formulated regulatory response to bitcoin instead of going after users on an ad hoc basis. It is also vital for the central bank and lawmakers to join the global discussion on regulating cryptocurrency immediately and participate in concerted efforts to ensure that the use of this new technology is only for the good of the society and economy.

You must login to your account to continue exchange.